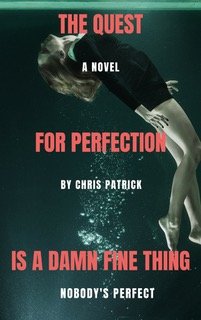 A far cry from one short story in a horror anthology, I’ve written a novel. It’s called The Quest For Perfection (Is A Damn Fine Thing) and you can order it from Amazon here. It’s a mystery-thriller with some horror mixed in for good measure. I like to describe it as ‘if Stephen King or Michael Crichton wrote an episode of Desperate Housewives or Lost’. Before I get into the novel though, let’s rewind a bit!

It was late 2016. I was sitting at my desk in work, trying my best not to watch the clock. Then the e-mail came through from – Twisted 50 was officially a best-seller and had taken the Number 1 spot from the master of horror Stephen King. I couldn’t believe it – it was a phenomenal bookend to an amazing year I had experienced as a writer, and specifically with the Twisted 50 journey.

Since being selected as a Twisted 50 writer, I have self-published two short-story collections, created and co-wrote the Toasted Fiction Thaetre podcast with 10 other writers, written and directed a few plays and most recently have had two comedy sketches on BBC The Social – I Am A Lad and BBC Brainstorm..

This all started with Twisted 50. From the moment I uploaded my short story Deadlands in 2015 and received feedback from the fantastically supportive community of writers, I started believing in myself more as a writer, and the stories I was writing. At this stage I was more of a playwright (mentored by great Scottish playwrights David Cosgrove and Johnny McKnight) so writing prose was completely alien to me. When the story made the short-list and then the final collection, I was elated. It was a fantastic journey that was a real milestone for me as a writer.  And the best part, for me, was receiving notes on the story and rewriting it for the collection. As a playwright and filmmaker, I love collaborating, so to do that with a short story was amazing.

Fast-forward to 2019 and I’m releasing my debut novel, The Quest For Perfection (Is A Damn Fine Thing) which is more than a little twisted and owes a great deal to my experience with Twisted 50. It revolves around the residents of an idyllic community called Fredrick Street. Life is just perfect for the residents and they have everything they ever wanted and are living the lives they dreamed of when they were kids. But all is not what it seems on the street. When the visions start and people begin to disappear, the life they knew before is over. Fredrick Street was perfect – unfortunately the world has other plans

If it wasn’t for the confidence that grew from being selected as part of Twisted 50 Vol. 1 and the community of writers and creative team behind the anthology, I wouldn’t have believed in my ability as a writer to tell this type of story, never mind releasing it as a novel!

Being selected as part of this process made me feel legitimate as a writer, and it’s something I’ve held on too and kept writing. I’m releasing this as an indie author, which is a scary prospect (perhaps scarier than some of the events in the novel) as the world is chalk full of fantastic stories from brilliant writers. But the thing I need to remember, is I’m one of them. I’m a best-selling author – and it’s down to Twisted 50 I have to thank for that.

For more info on Chris’ creative projects, including sketches and books, head to www.pickpocketmedia.com