The Plane Truth About My Horror Story by David Young 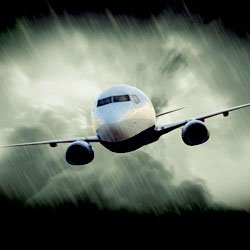 I’m not a horror writer. Sure, sometimes my writing is horrific, but usually not on purpose. I normally write sitcom pilots, but I had enjoyed writing for the screen side of Create50, and wanted to be part of the prose platform as well. But if I were to write convincing horror, I couldn’t fake my way through this. I had to write about something that truly scared me. So I opened up my laptop and started a list:

THINGS THAT SCARE ME
-Clowns
-Creepy Children
-My mother’s cooking

-My mother, dressed as a clown, cooking creepy children.

None of these seemed viable story drivers to me. So as I sat on my flight to Nashville, trying to think about what terrified me, our flight kissed just the slightest suggestion of turbulence and it hit me: I have never gotten on a plane without thinking the flight would end in a huge fireball. Thrilled that I had come up with an idea, I was struck with two immediate thoughts:
1) It’s not just me. Everyone has to be scared of flying, whether they admit it or not, and
2) GET ME OFF THIS DAMN PLANE!

While I buy the physics of flight, my problem is the total commitment I make once the pressurized metal tube I’m sitting in leaves the ground to hurtle through the sky at 500 miles an hour about seven miles high. I once heard Kurt Russell, who is a pilot, say that people aren’t afraid of flying, they’re just control freaks afraid of letting someone else fly. And I think that’s true. When I hear about a crash, the worst part is thinking about the helplessness the passengers felt knowing they were on a one-way journey to their fate.

Cheery thought, right? Just keep in mind this is coming from a guy who watches “Air Crash Investigation” like other people watch “Friends” or “Seinfeld.” So I can tell you the difference between V1 and V2 speeds, what a Pitot Tube does, and why you should never over-use the rudder to compensate for jet wash. I can recite crash information like some kids can recite sports stats. So with all this knowledge and fear, I pounded out my story.

Like everything I write, I was blindly proud of my first draft of “Clear Air Turbulence.” The story’s beginning and end were symmetrical. I illustrated the ideas of doom and inevitability. And I even updated a creepy famous legend. Or at least I thought it was famous and well-known. After posting my manuscript the notes came back consistently wondering what the hell I had been on about.

One of the strengths of Create50 is how its community of writers give feedback on your work. Writing is a solitary profession, and getting good, useful feedback from others is as rare as writing a polished first draft. Sure, not every piece of feedback will be on point, but when they are consistent like mine were, there was nothing to do but listen, say thank you, and fix the story.

However, the second draft swung too far the other way, and the feedback was again consistent: I was holding the reader’s hand too much. Okay, let’s give it a third try (another strength of Create50 is the opportunity to submit subsequent, improved drafts). The third time closer, but now that the story and tone were better settled, the continuity issues became more readily apparent. By the time I submitted the fourth draft, the sitcom writer had written a horror short story.

When it got selected for the Twisted’s Evil Little Sister book, I was ecstatic. I wanted to tell everyone, “Hey, I’m going to have my prose published!” But when I saw the names of the other authors and read their wonderful work I thought, “Okay, it was obviously a mistake. Don’t draw attention to yourself, and sign and return the contract quickly.” Then after one last round with a brilliant editor who insightfully told me, “Delete this and fix that,” the story was ready for primetime.

So thanks to the Create50 program I’m going to see my name in a book, and for the first time, not written in crayon. I will be entering every single one of the other Create50 contests as they are posted. A huge thanks to Chris and everyone involved in running the program, and to every writer that has given me feedback. My writing has gotten better not just by the notes I’ve received, but by the exercise of giving other people my notes on their work. It’s a diabolic setup that has made me improve despite myself.

And of course, a big thanks to the Wright Brothers. They know why.