Based on a True Story by Paul W. Franklin 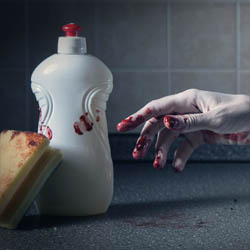 An epithet often seen on movie posters, and in many cases I wonder exactly how much of said film – this being Hollywood – resides in reality. The recent ‘Sully’, for example: yes a plane landed on the Hudson River, but that part of the story lasted all of ten minutes, so how much of the rest is fabricated?

Well, one might in fact ask the same of ‘No Chain’, my Twisted Sister story, because it was also based on a true story.

“Oh, what, in as far as you once knew a girl called Angela?!” you might scoff. No, it’s not that tenuous, but I do wonder if Create 50 could retrospectively add the ‘based on a true story’ moniker under the title.

Without giving too much away, the story goes that I have a close friend who bought a small flat – her first – in South London. Amongst her possessions she had some wooden carvings, including Easter Island heads, which she placed on a ledge. Over the next couple of weeks she noticed that these objects were changing position during the night. Or while she was at work. She was genuinely worried that she’d bought a haunted house. She would put the carvings back to how they were, but sure enough they would again turn their heads while her head was turned.

Then one day she was standing near them when a train went past. The resulting rumblings sent a shiver of vibrations throughout the flat, thus causing the figurines to wobble and rotate.

When I first heard this tale, I happened to be writing a couple of short film scripts for (what would hopefully become) an online horror series. I knew the turning heads story was a good ‘un, so I wrote a screenplay based on that, and sure enough that is the one the producers went for.

They wanted to use it as the Pilot; they also had a connection at Channel 4, where we attended a meeting. The team consequently shot the script, and it was all fairly exciting. However, the resulting film didn’t turn out very well (in my opinion), I didn’t hear anything for months, and in the end it all came to nothing.

And then Twisted 50 came along.

I was familiar with the concept as I’d entered a script in the original 50 Kisses [a rather left-field story of a nervous snooker player and a ‘kiss’ on the pink], so I adapted the screenplay to prose, and – a few weeks and a couple of tweaks later – it ended up in Twisted Sister.

And that is how ‘No Chain’ came to be. True story.