Would anyone at a comic convention be interested in a horror anthology? By Andy Perry

I’ve never tracked an Amazon delivery so closely. After reading Chris Jones’ update that Twisted 50 Vol. 2 was available to buy, I instinctively bought 10 (yes, ten) copies. You may think that a little extravagant, but I had a plan. The delivery was arriving Friday, and the next day, I was in Newport, Wales selling my wares at Geeked Festive – the Christmas Newport Comic Con. I hoped the delivery would arrive before I needed to leave. Thankfully the ping-pong sounded, and a box arrived with 10 (yes, ten) shiny copies of Twisted 50 Vol. 2. I thumbed to story number 50 (I’d already read the preview and seen I was the final story) and read my name atop my first published short story.

I don’t know how many times I’d read ‘Ingrowing’, from its early drafts and inception, to the excellent feedback from the Create50 community, to the final submission before I discovered it had been successful and would appear in print. But reading it in my hands for the first time was a special experience.

I arrived at the comic con the next day and we set the stall out. Would anyone at a comic convention be interested in a horror anthology? It turns out very, because 30 minutes after the doors opened, I sold a copy. Even better, I was asked to sign it. 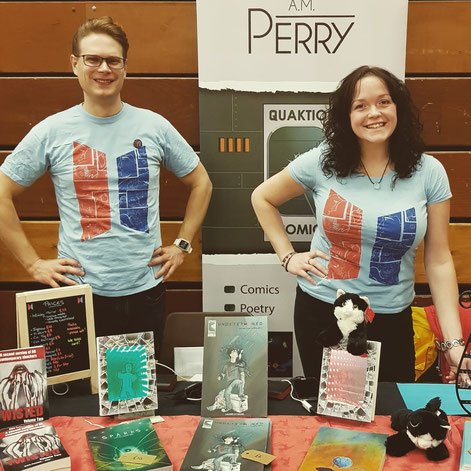 I’ve never been blessed with the best handwriting and it didn’t help being a little nervous. I managed to scrawl a ‘Don’t have nightmares!’ and signed my name on page 270. One very happy customer (and, quite possibly, an even happier author).

A few hours later, I got speaking to a nice chap about horror stories and told him about the Create50 initiative and the Twisted series. Another sale, another signing, chalked up.

All in all, it was a very successful day. I sold a couple of copies of Twisted 50, a few comics and registered a lot of interest for my blog and mailing list.

It seems book launches are like buses. Within days of Twisted 50 Vol. 2 being available, I launched my second Kickstarter for the second episode of my sci-fi comic, Undetermined. All my energy over the last few weeks has been ploughed into the launch and running of the Kickstarter campaign. Now it’s time to spread the word about my story, ‘Ingrowing’ and all the other sordid/spooky/surreal tales in the Twisted 50 collection.

Next stop, the Twisted 50 and Singularity Awards Party on December 18th. Who knew life as an author would be so frantic?

Here’s to a Merry and Twisted Christmas, and an even more successful 2019…!