The challenge of Twisted50: Overcoming (somewhat) my fear of horror by Milethia Thomas 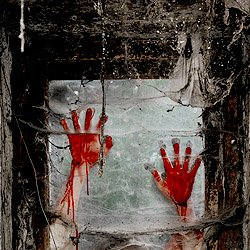 I’m a scaredy-cat… when it comes to reading or watching horror – there’s no denying that. It probably stems from walking into the living-room, when I was about six, to tell my mam that I was frightened of the dark, just as, on the television screen, a shadowy face emerged from the darkness and peered through the window of someone’s house. I’ve no idea what the film/programme was – it probably wasn’t a horror – but it played out as a horror in my 6-year-old mind.
I’m all right now though.

I’ve written a few ‘chilling’ stories in the past but would never have described myself as a ‘horror writer’; indeed, I would have shied away from reading or watching something of this genre. I’d read Edgar Allan Poe, Dracula, and some Stephen King; The Ghost of Thomas Kempe is a favourite book I read as a child, about a poltergeist; one of my favourite films is Spielberg’s Poltergeist, but you wouldn’t find me watching anything gory.

What I’m not afraid of, though, is a challenge; so when I read the information for Twisted50 – “If Hammer House of Horror, Tales of the Unexpected and Pans Books of Horror set your pulse racing and mind spinning as a youngster…” – that helped me in my decision to try to write something. Tales of the Unexpected… The series music, which is creepy and strangely buoyant (reminiscent of circus or fairground music), is impossible to forget.
Could I write my own tale of the unexpected?

Additionally, I have relished the Create50 process: read other people’s work, offer feedback, and then submit my own writing for others to read and give feedback. I’d been an active reader and reviewer for The Impact and had enjoyed this, so I thought, although not as confidently, that I would read and offer my thoughts to writers for Twisted50.

And what an opportunity. I knew that there would be some people writing for Twisted50 whose genre this was and who have experience; I knew from The Impact that people would offer honest and helpful advice – so what was there to lose? Nothing – other than getting over that initial fluttering inside about submitting writing. I submitted four stories, which I feel benefited from the advice/feedback from the Create50 community.

I’m chuffed that Busy Izzie was chosen for Evil Little Sister.  Of the stories I wrote, this is a tale of the unexpected.
My advice as a novice, sometimes nervous, writer of horror is to simply ‘get stuck in’. We all have nothing to lose and a lot more to gain from the shared experience of Create50.

As for being a scaredy-cat…

I try to read Twisted horror stories during the day. I find that’s best – for me, anyway.