Writing Murmation and facing my own demons by Les Grice 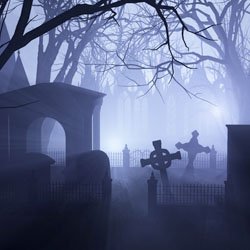 From where I sat he looked seven foot tall and with his barrel-chest, his slicked-back black- greying hair and moustache, his heavy-framed glasses, ruddy complexion, crisp shirt and grey suit, he looked every inch like an ex-Sgt. Major who had seen more in war than he would ever want to tell a class of thirty or so nine year old schoolchildren.

But we knew him as the Headmaster of Uxbridge Street Infants and Junior School, someone rarely seen but always respected.

So to see him stood at the front of the classroom having just interrupted a maths lesson, was to say the least unusual. He held some hand-written pages in his hand and having apologised for stopping the lesson he began to explain to the silent and slightly scared class why.

The day before, the class, including me, had been asked to write a story, the subject of which eludes me now and then it was to be handed in for marking. The night before the essay I had been at home watching an old black and white film, though it may have been in colour, but back then we still had a black and white TV. This would be about 1964. I don’t remember what film it was but after it finished a scene stuck in my mind where a giant dinosaur left huge footprints on a beach before it went off to eat humans.

Whilst writing the story, I got a bit stuck and the dinosaur-beach scene from the film came back to me and I used it. I remember writing the best descriptive language that a nine year old could muster, but also thinking, is this cheating? I handed it in, a little bit nervous, never having heard of plagiarism and even though all I did was borrow the scene and make it my own, I felt a little, perhaps unwarranted guilt.

So here was the huge Headmaster telling the whole class how he had been reading a story by young Les Grice and he wanted to read a paragraph from it. He read the paragraph about the dinosaur. I sunk into my seat, turned red, thought that I’d been rumbled and would surely be hauled in front of the class, given a dressing down, made to stand in the corner and sent home with my tail between my legs with a note for my parents.

“What a wonderfully descriptive piece of writing. It gave me great pleasure to read that. Well done young Les Grice, well done indeed”.

“That was in that film on TV the other night”, some dastardly kid in the class shouted out.

“Yes it was. I saw that film too”, said the Head, defending me to the hilt. “But the use of words here is still wonderful and if that film had never been made you could still picture the scene. Well done Les and keep it up”.

With that he left me to sink further into embarrassment, surrounded by classmates now hostile to the favouritism shown by the Head. You couldn’t win with kids, you were either a swot, a thicko or a girl

A few years ago I wondered whether or not that little incident, and another one a few years previous, was some kind of clue hinting that I should after all these years, write or at least try and see what happens. They say the clues to what you may have an aptitude for are there in your childhood and so I tentatively began to put pen to paper or rather fingers to keyboard and produce, well mostly rubbish of course.

But now here I am a few years later and I have had an entry for Create 50’s Twisted 2 Vol. 2 chosen for publication and there are similarities going back to that nine year old me, except as far as I remember Chris Jones looks nothing like my old Headmaster and has no military history to speak of, though he does bestride the LSF stage like a colossus.
But what they do have in common is opportunity. They both presented me with an opportunity to believe that I had something to say and then allowed me to share it with others.

What did I have to say? Well my story began with a simple idea and it slowly developed from there and after many rewrites, some experimentation and help from a few readers, I reached a point where I thought I had written something that was telling a story on the outside and was wrapped up in a twisted tale, but it was only after did I see the sub-text about us and Nature.

Don’t take nature for granted, we are part of it. There is a web of life and it’s not us who spins the web, we are merely a strand in it. Animals can be our compatriots and make our world a wondrous place to live in, but they can be Mother Nature’s foot-soldiers and may wreak terrible revenge on us if we continue to ignore what we are doing to our planet and therefore ourselves.

Are there any recommendations I can make to other writers?  Frankly I don’t think I’m in a position to offer too much advice except as Stephen King preaches, read a lot, write a lot, read his book (and others) and stay on the bus whether you can write everyday or every week and keep working on your stories.

So thank you to Chris Jones and his team for allowing me to indulge myself just a little in reaching back all those years to that scared shy little boy who with just a few words and a bit of imagination was able to create a little bit of magic inside my Headmasters mind and was allowed to believe in himself.

Oh and if you want to read the story, it’s called ‘Murmuration’. I hope you enjoy it. Thanks.