The Boomerang Effect and How I Became an Audiobook Convert by Kim L. Wheeler 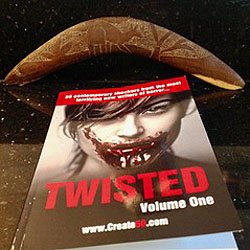 When I was young (and flying to the other side of the world was still relatively new and special) my father brought me back an elaborately carved wooden boomerang from a business trip to Australia. So in awe of this object was I that I dare not throw it for fear it may break.

Years later, I plucked up the courage and sent it off on its inaugural flight. Granted, when it returned and I failed to catch it, it landed on a stone which took a small chip off one corner but the joy of accomplishing something so singular, far outweighed the now slight imperfection.

As writers, the benefits gained by throwing our work out to our known peers and receiving their feedback is undeniable. However, on occasions, it can be total strangers, met via other people’s connections, who influence our tales in unpredictably special ways. This was my experience of Twisted50’s Audiobook recently.

Having received an e-mail from Chris Jones, asking if it would be ‘okay’ to record my story, Deep Conviction, from the Twisted’s Evil Little Sister horror anthology, as a bonus track for the Twisted50 Audiobook, I believe my response was “Hells, yeah!” What a fantastic bonus surprise!

Chris was no stranger though; I’d seen him from afar at The London Screenwriters’ Festival many times and, last year, had the pleasure of getting to know him a little better during Talent Campus. However, it was two total strangers, Chris’s contacts, Helen Lloyd and Graham Vick who were to influence my journey as a writer still further. Helen organised the recordings for the Twisted50 audiobook and so allocated Graham to narrate Deep Conviction; she couldn’t have made a better choice.

When I was sent the link to the audio excerpt, I visited the page with some degree of trepidation. It can be both exhilarating and nerve-wracking hearing your own words being fired back at you. Are they really as good as you hope they are? Will people ‘get’ the point of your story? Does it even make sense?

Our words are our babies. Having a babysitter allocated to them whom you have never met, is an interesting concept. No amount of listening to the artificial, non-inflective regurgitations of a computer voice ‘proofreading’ your manuscript or screenplay, can prepare you for listening to a talented actor applying their craft and interpretation to your story. I’d learned this already from the Actors’ Table Reads at LSF. The words may not always return to your ears in the way you heard them when they first leapt from imagination to keyboard to screen but this is a good thing. Sometimes, new twists and inflections can be enlightening and improve vastly your listening pleasure. However, first you must learn to let go!

Confession, I haven’t listened to an audiobook since our children were young. On our long drives into France, cassette tapes of Roald Dahl’s The Witches and Charlie and the Chocolate Factory would invariably be broadcast over the car speakers and I have to admit to enjoying this guilty pleasure. I cannot think for the life of me why I haven’t revisited this medium since then; especially with declining eyesight an increasing problem.

Listening to Graham read the first paragraphs of Deep Conviction with such passion and expertise, was exhilarating and enlightening in equal measure. The tone and manner of his speaking were exactly how I’d imagined my wicked protagonist. Result! His inflections, however, picked out sweet nuances which were deliciously unexpected and yes, for me, highlighted one section which I could have improved upon. Just as various Actors’ Table Reads, the production of my play Drawing Solace on stage, Talent Campus and now this experience has taught me, the benefits of hearing your words spoken by others is invaluable; so much so that I would not now contemplate sending out any manuscript or screenplay without first passing it through the whole ‘read’ process. I am an audiobook convert for sure!

Only by throwing our writerly boomerangs can we benefit from their journey. Who knows exactly where the object may land, and yes, it may suffer a chip or two along the way, but rest assured that your words will revisit you, richer for the experience.

Thank you so much to Chris, Helen, Graham and all concerned. I look forward to meeting everyone at the Twisted Book Launch.

I’m off to fly my boomerang now. Bonzer!