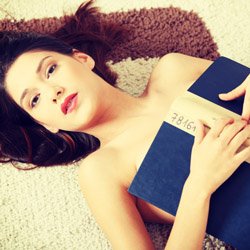 Paper Cuts was a letter that had already been written in my mind some years ago and deposited in an envelope somewhere in a sorting office at the back of it.

I have suffered with severe ME/CFS since I was twenty-two, and it left me so ill that there were times over the years when I couldn’t move, speak, or even write my own name. To distract myself from pain and nausea while I was trapped inside my body, I used to tell myself stories. Paper Cuts was one of those many stories. I had grown up in love with short fiction, especially horror and sci-fi. I was that cliché of a lonely only child: a bedroom recluse who wrote and drew. The idea that writing would be waiting for me again was a light at the end of the tunnel, keeping me going after I fell ill. I dragged myself back to a point where I was able to start doing small amounts again, and when I did, I wrote Paper Cuts a few days before the Twisted50 deadline, editing it until the last minute.

I first read Clive Barker’s Books of Blood when I was eleven, and I remember that (rather sweetly), it was my childhood ambition to have him read something I had written. When I noticed his involvement in judging the entries for the Twisted50 book, it reminded me of the kid I used to be and I started writing again. I was finally, physically able to do it. Paper Cuts is a little nod to him.

Before I got sick, I went to school and later university in Cambridge. The library in Paper Cuts is based on the University Library, which I often walk through in daydreams. It sits and surveys the town, a creature of quiet, but unmistakable menace. Whenever I think about it, I remember the constant dark of the book stacks that stretch out forever, and the density of the dread that pervades the space. It’s claustrophobic, the air tense and soured with the anxiety of students chasing deadlines and studying for exams. Like a black hole, it drags every student in the town towards it. I’ve often seen libraries as doorways to other dimensions, because every time you pick up a book and begin to read, you are entering another universe.

Writing allows me to be myself in a way that I haven’t been able to for many years. I always tried to remember that I existed with a purpose, and writing was that purpose. The ability to express myself, having been in a position where I couldn’t do so in any way, is something I will never take for granted. Writing feels magical. I can create an image in someone else’s mind with a flash of scribbled ink or the blink of a cursor. If you read to the end of this, it means I gave you a little of myself, and stole some of your time.

A letter yearns for a reader. Thank you for opening the one I rediscovered at the back of my mind. It means I exist.