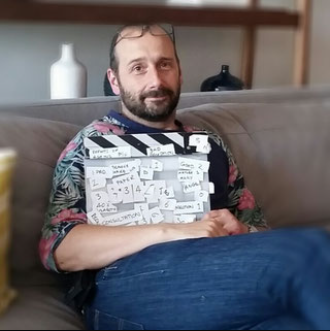 My Story from Twisted’s Evil Little Sister: The Turned

Favourite quote: ‘Inside the four men, were four bullets’

The original hands on Director Mat began working as a runner at the Jim Henson Creature shop working on projects such as Lost in Space and Buddy before moving into then camera assisting and operator in house for Metro Broadcast, directing short pieces on cameras at work. Ever the “cocky bastard with a camera” he decided to get his feet wet by directing a feature film. “Draining Lizards” was the first kung fu feature film made in the UK and has received worldwide distribution.

With access to HD cameras and equipment through his operating skills, he worked on a number of high quality Promo’s and short films and documentaries. These were all well received and have been shown at a number of film festivals.

In 2000 he worked as head of production for the digital holdings but after six months decided he could do it better his own way and set up Sunipa Pictures and began producing and directing corporate works and live DVD production. These went well and provided a living for the next few years.

He then decided it was time to earn some real money and after a brief stint in true crime with Psychic Private Eyes, he began producing virals and TV campaigns, first with Spacebar Media and then at Hero Media. Although he has recently signed ato ESA Inspire where he recently produced his first commercial work for them.

Here he was responsible for the launch campaigns for Wink Bingo, Posh bingo, the hugely successful Tasty Bingo and more recently Red Bus bingo. It’s all about colour and demographic. Though small budget the Wink Bingo campaigns have had a huge impact. By working with animatronic gorillas, 3D animations, Costume drama and 2D effects they stood out from the terrible bingo commercials around at the time and forced other bingo advertisers to up their game.

These campaigns brought Wink and Posh Bingo from being small sites to becoming the third largest online bingo sites in the UK. With Tasty and Red Bus we await the results. It was a firm understanding of the demographic in the production which meant they fitted with the clientele of the sites.

In the Promo world he created highly visual and simple pieces for Pest and the Duel and more recently the Split screen Bodymachine, City Lights, which was featured in several festivals in the UK. He has recently been commissioned by the National Gallery to create some fantastic insights into their latest exhibition, Building the Renaissance, Working increasingly in documentary work in 2010 he was dragged back into the feature world from three sides. First JNC productions an the IRON MONK project which place Mat at the helm of a UK, Hardcore, Kung Fu Film as well as Yokon films first venture into Horror with its film Scrublands and the horsemen by Jonathan Groom.

It is this understanding of all aspects of film making and storytelling which gives Mat the skills to produce films of a depth and visual quality often lacking in other directors.