Good Girls Don’t Write Horror… Or Do They? by Danielle Wager 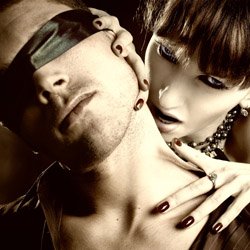 ‘It was… a little bit….dark and deathy for my tastes?’

These were the words that accompanied one of my first attempts at showing my short story writing to others when I was younger.

I had always had one of those sorts of imaginations; capable of extracting the very worst possible outcome from any given scenario. An absolute boon for a writer, slightly less so for the shy, awkward teenager, who found other people and new situations stressful at the best of times.

But, still something in me as a teenager was drawn towards both reading and writing horror stories. All through my youth, if a library book had a black cover with blood dripping off of it, or the merest hint of a vampire or fangs, I was there.

However, over the years, whether by writing course tutors, family, or just other people that I met, it was gradually made clear that for a lady to take an interest in such things; it simply wasn’t the done thing.

A desire to write crime stories where the monster could be safely explained away as being human raised a few eyebrows here and there as well, but could be safely explained away as part of a more mainstream, or even literary ambition (Patricia Highsmith, and Ruth Rendell anyone?) But horror? No. For someone who was aiming to be a supposedly mainstream writer of scripts that was beyond the pale.

(At least before the recent upsurge female writer director led horror projects such as The Babadook, A Girl Walks Home Alone At Night or Under The Shadow etc.) Such tastes were a thing best kept to yourself, like a bad habit of some sort or a predilection for spanking.

Somehow, when I saw the Twisted 50 callout for horror stories, something about it called out to me, despite the fact that I hadn’t written any short stories in years, and so I entered:

And ‘The Lightning Tree’

‘The Memory Man’, which was particularly visual, I ended up re-writing as a short horror/ science fiction script. Later chosen for a scriptlab and Live Performance with ‘Fight Club’ Writer/ Producer, Jim Uhls at last year’s London Screenwriter’s Festival.

The experience of which was fantastic, with people coming up to me afterwards to tell me how much they enjoyed it, or even offering to help make it as a short film.

So, why then am I still writing this?

Well, from that first short story idea, a larger story world developed inside my head. An idea for an ongoing science fiction series, set inside a dystopian future, with people doing dark deeds in order to survive, and a female protagonist gifted (or cursed, depending on your viewpoint) with the ability to see inside other people’s minds.

I confidently wrote the pilot for it and an outline for the series as a whole, before sending it to the BAFTA Rocliffe TV Drama writing competition, confidently expecting to hear nothing back.

But then… Surprise! It was selected as one of ten scripts chosen by the judges for their shortlist. I kept my fingers crossed, hoping and praying to get through into the final three whose scripts would actually be performed.

Of course, it didn’t quite work out like that, and eventually I was informed that my script did not get through. I did however, receive a very complimentary e-mail from the BAFTA Rocliffe team, and an offer of two tickets to go network at the actual event at BAFTA in April. A world, that I would never have been invited into, had I not sat down at the keyboard in the first place to pen that short story for Create50.

I am also busy currently writing and developing my other horror story ‘The Lightning Tree’ from that year as a short script, in the hope that maybe lightning might strike twice, (pun intended) and have two more short stories entered in for this year’s Twisted 50 2 competition.

Both of which, hopefully, have a very real chance of inclusion in this year’s book. Along with lots of other stories from very talented female (and male!) horror writers I have met along the way whose work I have read and enjoyed.

I guess that what I am trying to say here, is that Twisted 50 has opened up a lot of opportunities for both for me and my writing, that otherwise I simply would not have had. So, if you have an idea for horror short story you should send it.

What’s the worst that could happen?