From smut to the surreal by Lee Burgess 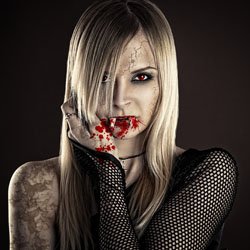 WARNING: The following contains information about scary stories. There may be spoilers, there may be disturbing uses of language that leads to sweating, a quickened heart-beat and in some cases the soiling of one’s lucky underwear. Not so lucky if you ask me.

If you experience any discomfort whilst reading this incredibly well written article, please refrain from contacting the writer as the fault lies squarely with those behind the planned publication of Twisted50: Vol 2/3, namely the Create50 team. I take no responsibility for the outcome of said piece. Oh, and I have added explanations of complex writer thingy bobs.

Our journey begins not with my first Twisted entry (The last brother) but with a screenplay entitled Glow. This screenplay is my debut feature script and includes all manner of supernatural spookiness in a Welsh valley mining community. For my short story I decided to use a similar setting and transport the tale across the pond to the US where they still have the remnants of a coal mining industry. I wanted to tell the tale of a mining disaster which, in my script is little more than subtext (the bit of the story that’s kind of in the background) so I plunged my protagonist deep under the ground in almost pitch-black darkness, because I’m mean like that. I then designed my antagonist, a big invisible beast made of flammable (fiery) gas. The main aim was to use the fiery beast to fry miners, leaving our poor old main character to suffer alone in the thick deathly atmosphere of the tunnel. I gave myself an obstacle to get around, because obviously this writing lark is very easy.

I decided to use the gassy monster as a metaphor (there’s posh!), which would make me seem like a right old clever clogs, which I am. The monster isn’t really a monster, but a mass of particles that catch fire and explode, but (this is the clever bit) I gave the gas a character of its own. Next, I needed to offer readers something to both fear and engage with. No, not my mum, but a rat. I wanted something to keep my main character company during his dying moments, but one who could have a creepy context. The rat is both a friend and an enemy. She scurries about in the tunnel, feeding on charred flesh, squeaking to our dying man. Sweet, right? However, you’ve been fooled, because the rat has a motive for her seemingly friendly nature. This was my next sticking point, bringing a further level of darkness to the proceedings. I don’t want to spoil the end, so I’ll just tell you this, no rats were harmed in the writing of this story. If you like rats, blood, darkness, and fire, oh and burnt flesh, firstly I’m a bit worried and secondly, I really hope the story gets into the book!

Many of the Create50 web community were unaware that my next story Brain Drain was based on some of the darker aspects of my time at a boarding school for cute little disabled children. I had always wanted to write a coming of age story, because it would probably give me a chance to use rude words and smutty content. I had begun planning a pilot for a sitcom called My kind of normal, and was busy chuckling to myself about boobies and people falling over, when I came to ask myself a question that took even me by surprise.

Could this comedy be manipulated into a really harrowing piece of graphic horror with a psycho-sexual theme? The answer is a story that takes all the smut and humiliation of puberty and disability, twists it, makes it smell, sweat, and weep and then blows it out through the nostrils of Satan. Confused? Good, because so was I at the age of 12 when I was suddenly thrown into a world of the disabled community, where girls and boys had little in the way of boundaries, and where adults often misunderstood the complex emotions of institutionalized kids.

I wanted to give readers a grim glimpse into a warped version of events. Of course, I could have turned to comedy-horror but that seemed like a cop-out and a bit corny. Plus, how do you write a scene including a catheter, an ugly old nurse, a beautiful young woman, and a very much unwanted erection (yes, I went there) as a comedy set-piece? I had to think back to my time at school, I had to pick the most squirm-worthy and explicit memories and then make them weirder, sicker, more twisted.

In a nut-shell, I had to take all the teenage fumbling and messy medical encounters and turn them into a Clive-Barkeresque, surreal nightmare. So, out went the masturbation gags, the glimpses of bras and tales of first-love, and in came stale menstrual blood, nasty invasive procedures and, well yes, I reinstated the Bishop Bashing, but with a more perverted slant.  This was a real mind-bender to write as I really had to manipulate truths, try not to write simple cliché characters, and still give the reader an unrestrained ride around a world that although based on a kind of reality, is very much set in a disturbing, darkened universe where, if you are not careful, you will be trapped. I just hope Brain Drain makes people quiver when reading, just as it did as I wrote it. You can find Brain Drain here: http://twisted-vol2.create50.com/scripts/588cae506e6f6471af00017a?age=verified

So, there you have it. I thought this would be a simple process of writing awful things that I hoped would shock and offend, and what I found was I was pitted against people who knew how to write scary horror stories better than me, so I had to up my game. What started as an exercise in all things mutilated and dead, finished with me meeting some of the most sick-minded, horrifically talented writers and learning about new levels of squelchy, crawling genre busting greatness. I think next time I shall really stretch my comedy horror side, as I really feel that there needs to be more in the way of farting and knob jokes (or lady bits humour) in the horror genre, so watch out Twisted50, this is just the beginning…